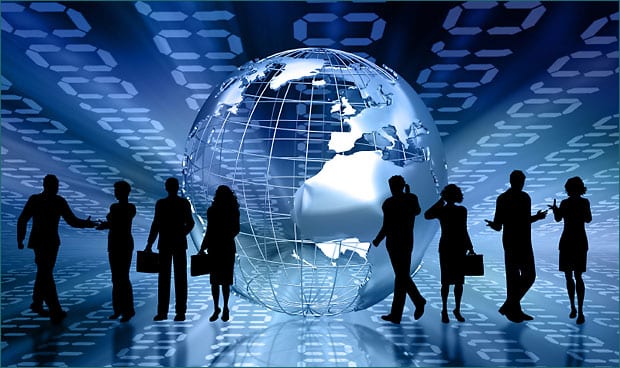 The conversation which I find increasingly common at the minute is that of the interplay between the digital and analogue worlds.  The Intersticia logo represents this and, for me, this is one of the most pressing challenges facing us all as we struggle to deal with the pervasiveness of technologies in the early twenty first century.

I recently found a number of relevant articles which explore this theme including “Why the fax machine refuses to die” (Paul Venezia), the Economist’s “Great digital expectations” and an article on High Frequency Trading in the stock markets.  All refer to either the persistence of older analogue technologies (fax machines and books) or the replacement of humans by automated systems, and lurking within each is a quiet sense of unease.

“Whilst the prevalence of computer based trading is not disputed, there are diverse views on the risks and benefits which it brings today, and how these could develop in the future.”

In essence we as humans are analogue.  We operate in a physically mediated environment of atoms, and we think in a continuum of ambiguity, complexity and confusion.  Life is not black or white, it is a kaleidoscope of colours, and whilst digital technologies can help us in many ways their pervasiveness also means that we learn to think differently about much of what we do.

Matt McAlister describes what he calls “the binding effects of the digital and physical worlds” because technology convergence, and particularly the rapidly evolving internet of things, is already profoundly changing the shape of relationships, markets and social institutions.

So, let’s pause for a minute and ask ourselves some key questions about what “digital” really means.  I thought I had some idea until I worked with someone who really understands it, my friend and colleague Michele Berkhout.  Michele is a marketer through and through, and she intuitively feels digital and data, which she sees as being pretty much one and same thing.  For a number of years she patiently coached me through an understanding of data to get to a place where, whilst not being an expert, I feel I am at least far better equipped to ask some of the necessary questions and to look for some of the more important clues in the digital information management puzzle.

This is what I think challenges both communicators and organizational/HR people alike because so often we have to make the high level connections and look at the macro view whilst missing the detail which may contain something crucial.  Conversely those buried in the details don’t necessarily see the bigger picture and all too often there is a paucity of abstract thinking particularly in sales focused organisations where the KPIs are around short term targets and immediate goals.

For those of us brought up in the analogue world the change to digital is not necessarily a simple one, regardless of the prevalence of digitised information around us.  And for those digital natives who have rarely written a letter, let alone listened to a song on vinyl or developed a photograph in a dark room, thinking physically can be a stretch.

The best overview of the characteristics of digital technologies I have found is that presented by Shoshana Zuboff and James Maxmin in their seminal text “The Support Economy“.  In order to get people thinking of the analogue/digital dialectic I often do an exercise in workshops where I ask participants to think about the following.

Digital technologies have the following nine characteristics, so think about a “document” (which we will define as a “content with boundaries”), how does that document manifest in both the digital and physical worlds?  I illustrate the exercise in the table below. 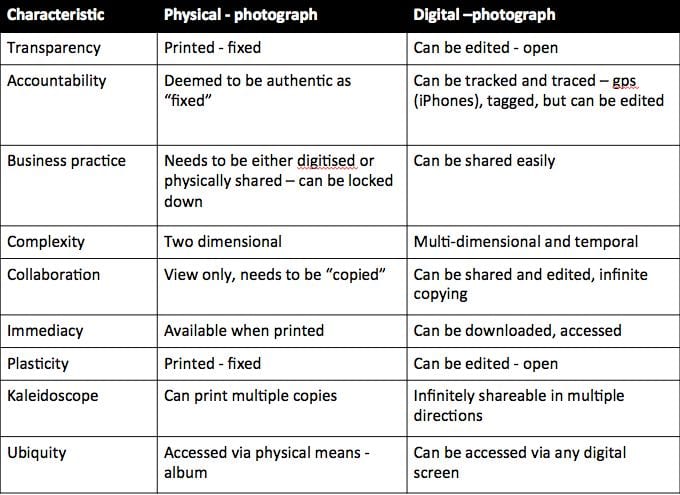 What constantly surprises me is the conversation that this exercise generates as digital immigrants suddenly gain an understanding of the power of digital information, and digital natives realise that there may be some real value in the old way of doing things.

What is just beginning to dawn on us is the impact that digital technologies are having on our humanity itself.  Nicholas Carr in his book “The Shallows”, contends that we are becoming increasingly shallow in the way that we relate to both information (we skim) and people (we
“follow” or we “friend”).  In n order to write the book itself Carr, a self-acknowledged technology addict, took himself to the mountains and disconnected for almost a year in order to be able to concentrate.  He reconnected happily afterwards but with a newfound appreciation of the space that he had gained, and how he was himself was being shaped by the technologies he was using, as Marshall McLuhan had long ago predicted.

Sheila Keegan has been exploring this and in a recent article “Are we losing our minds?” she echoes Carr by stating that

“we must remember to regularly turn off our laptops, go outside, smell the roses and revel in the joys of our humanness. We do not need to lose our minds – even if those around us lose theirs.  Keeping our heads and using them seems to me a more attractive proposition.”

And this takes time, incubation and experience.  Something that we all too often lack.

So, where does that leave us?  It leaves us with the power of choice, which is itself an innately human quality.

We have a dazzling array of communications tools at our disposal, and, like kids in a candy shop, we seem to be rushing around trying to test them all.  In my research work around this over the past decade I was introduced to the work of Richard Harper and Abigail Sellen, both Microsoft and Xerox researchers, who wrote “The Myth of the Paperless Office“.  They introduce the notion of affordances, which are the essential quality of objects, or environments, that allow individuals to perform certain actions for certain purposes.  I interviewed Harper in 2007 and he surprised me by telling me how “analogue” the research environment still was, despite the high degree of comfort with digital technologies and the obvious capability for abstract thinking.  People still printed out emails, still used faxes and still had shelves lined with magazines and books.  I would suggest that this situation still largely remains, and it is because physical objects still afford certain qualities that people need, and I would suggest will continue to for quite some time.

In talking to people about this I have found a number of useful examples:

So, my take on all of this?  We need to learn to better understand how to use the cornucopia of technologies around us, and carefully observe what works best in any given situation based on what we need, not based on whatever new whiz bang capabilities are promised.  This is absolutely the case with social media where I see an almost manic rush to embrace these tools with very little forethought and even less strategy.  Sometimes the old way of doing things works just fine, and, in fact, can be better!  We need to see things in a complementary way, and as Jim Collins once said, to appreciate the tyranny of the “or” and the power of the “and”.

In the end it’s about the people, not the toys.