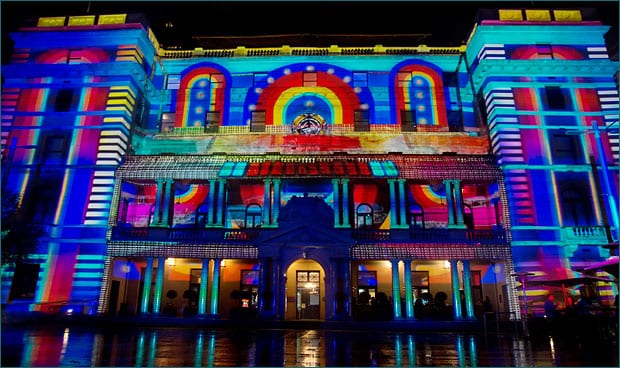 Last week I went to “Vivid Sydney” and, in particular, Genevieve Bell’s presentation as part of the “Festival of Big Ideas” with the specific challenge of talking about the “Ten Commandments:  Keep it real”.

I have written about Genevieve in numerous posts, and continually find her refreshing approach to the study of technology both insightful and, perhaps more importantly, digestible! By bringing an understanding of basic humanity together with a knowledge of socio-technical systems she is able to articulate what many of us already intuit, but she backs it up having done the research – and that research is, it seems to me, is largely based on common sense.

Genevieve describes her role as Chief Anthropologist at Intel as being based on “telling stories to drive new technology and innovation” in order to help “reinvent the way we experience computing”. That is a pretty cool gig and it reminded me why I like interacting with researchers from the big ICT labs who are out there imagining the future whilst simultaneously being accountable to their corporate masters. Their job is to provide insights and new ideas about what might be, based on that which is realistic and, above all, practical and useful.

In my early days with Fuji Xerox Australia (FXA) I took myself on a trip around the world visiting the various research labs including the famous PARC, (in Silicon Valley), XRCC in Canada, Xerox Research in Webster (New York), and finally, XRCE in Grenoble, France. Ten to fifteen years ago researchers could spend a good chunk of their time with blue-sky concepts and weren’t overly forced to focus on immediate problems or market dynamics. This “third horizon” thinking gave them the space to imagine, and to consider the world as it “could be”, and, as PARC (and later Apple Fellow) Alan Kay said

“The best way to predict the future is to invent it.”

But, that has all changed because, as the head of XRCC Hadi Mahabadi said to me in 2004, the “time to market” pressures are increasing which means that corporate researchers are becoming more focused on the shorter term. Whilst this is understandable, it is also problematic, because we need smart people to dream of what might be, and to present us with ways to envision what is possible.

Some of that comes out at events like “Vivid Sydney” where innovators such as Danny Rose create an experience such as “Move Your Building” at Customs House (pictured above). But it also emanates from an understanding that life is about “messiness”, and the unpredictable ways that people use technology.

In their book “Divining a Digital Future: Mess and Mythology in Ubiquitous Computing” Bell and her co-author Paul Dourish delve into the concept of “UbiComp” (ubiquitous computing). In some ways as technologies become more obvious they actually disappear and we forget about them. How many people have manual chokes on cars? Or change the TV channel by getting up and turning a nob? Or still have bank deposit books? So much of the mechanics of systems are invisible now that we are forgetting about how they actually work, and this, in itself, is presenting new challenges.

The recent furore about the US government’s “Prism” programme and the analysis of data is a case in point. As Bell said in her talk we’ve had “big data” for a very long time (think of the Doomsday Book) but what is different now is the power of the analytics, and the algorithms used in that will determine what is interpreted and how. Mind you, as Louis Pouzin said at WebSci 2013, “we will get bogged down by data” and the main obstacles are now the political and social resistance to change. Technologies will always be used in unexpected ways and it is this serendipity which offers so much potential.

This is where I find so much of academic research quite frustrating, because it seems to me to be still largely divorced from the realities of everyday life. In the conversations I’ve had within the Web Science community I have stressed the need to get research findings out to those who need them sooner rather than later. So much of what I see, particularly in the work I do with ANZSOG, is people struggling to cope with digital information systems, and they can’t wait for academic findings to be published, and then disseminated to the broader population via popular science.

Hence the need to “keep it real” and keep abreast of what corporate researchers are up to, particularly because they are market driven, and even more so, because they do have the opportunity to think and observe.

“We are standing on the precipice of the next wave of technology and hope.”

I, for one, agree with her.