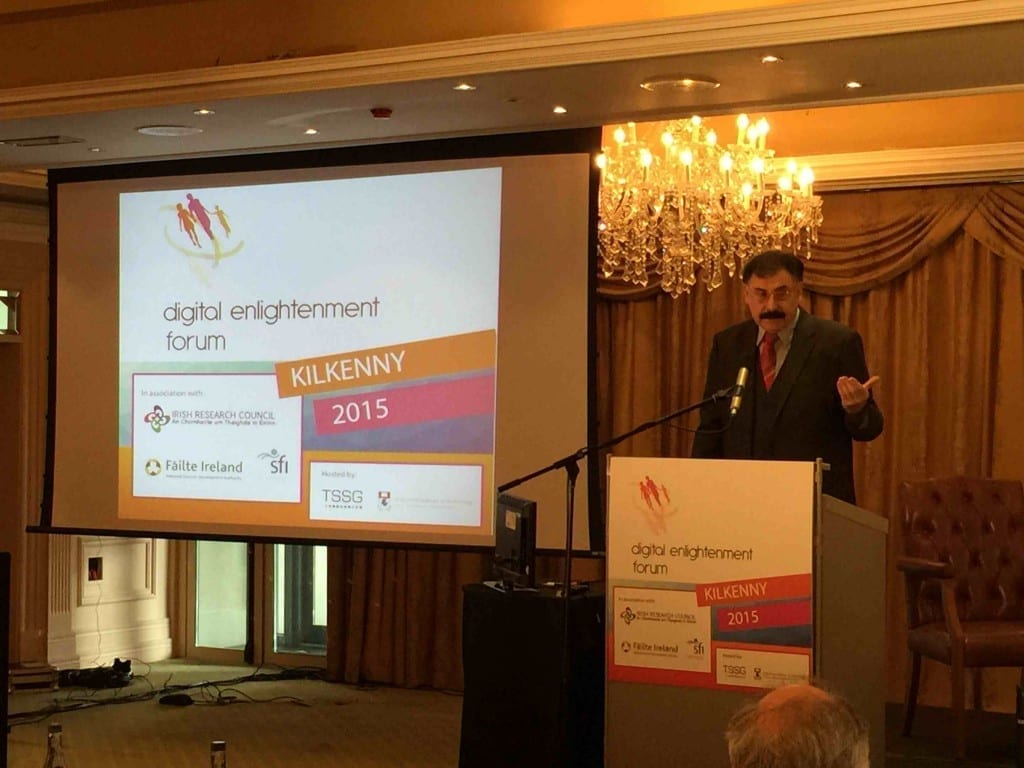 Last week I participated in the “Digital Enlightenment Forum” in Kilkenny, Ireland.

The Forum believes that

“people should enjoy the kinds of autonomy and freedom online that they do offline. The first priority of our mission is to establish and support the position and rights of the individual in relation to the rest of society. This means understanding how current and future digital technology can best be used to express our Identities in the digital world – taking into account the core values we cherish in our societies now.”

The word “enlightenment” is often linked to the Western European era from the mid 1600’s to late 1700’s when leading philosophers, scientists and artists challenged the traditional role of authority and instead promoted reason, analysis, and individualism as a way for people to live their lives and be governed.

This built upon the emerging intellectual infrastructure of mutually supporting institutions (universities, reading societies, libraries, periodicals, museums and masonic lodges) – together with the increasing travel to faraway places – which worked to increase literacy and “democratise” knowledge.

The DEF believes that as digital information technologies are once again redefining the power dynamics between individuals (as citizens, customers and consumers) and organisations, there is need for a new “digital enlightenment” that purposefully addresses such issues as:

“only an enlightened society can be aware”.

This need for “awareness” is probably now, more than ever, THE most important skill that is required.

The challenge is how to become “aware” – how to get people to have that “aha!” moment when it comes to information in digital form, and how to develop a consciousness around the inter-relationship that exists between culture and technologies.

I have spoken about the first, the “digital aha!”, in my previous blog on becoming “digitally savvy”. Much of this relates to understanding the language of “data” and the properties of information in digital form (there is no better reference for this than Shoshana Zuboff’s “The Support Economy”).  How we use this information links to both our experience and the “affordances” of the “artefacts” themselves (see previous blog post), but it also links to how we view the information from a moral and ethical perspective.

In his DEF address Minister Dara Murphy talked about the key differences between the EU the US when it comes to information, shaped by history and cultural norms and expectations.  He felt that Ireland, which hosts the European headquarters of some 29 of the top 33 IT companies, has a responsibility for taking leadership in the data protection space commenting that

“personal data is a vital human resource that must be protected by government – this is not known across society, particularly by the people who use it.”

By seeing data as a “vital human resource” there is a linkage to the notion of “public good”, and this is where so much of the debate, and the blurred boundaries between public and private, lies.  Both the internet and the World Wide Web were created as part of a “public infrastructure” (see Nicholas Gruen’s talk on “Government as Impresario”), but the applications and environments built on top of them have been increasingly created for private profit (the video “Cybertopia” is worth watching giving an insight around this).  Each nation has a different perspective on the relationship between the individual and society, but what is most important is to understand the biases that inherently exist in both policy and practice, and to see what Vaclav Havel described as the “hidden connections”.

This is what is driving people like Tim Berners-Lee to call for a “Magna Carta for the Web”, and a way to hold “people in power” to account, because each and every one of us has a “digital brand” within the increasingly seamless “information environment”.  Much of the technology we use today has been in existence for decades, but it is through convergence, through apps like “FitCoin” (which bring together fitness and finance), national genetic data and social, geospatial and other data, that a new form of “data currency” is beginning to emerge.  Already “privacy” is becoming a new “luxury” with its own rich and poor.

Our data – in all forms – is “who we are” and is as important to us as our DNA and our life savings.

Part of being “digitally savvy” is to also understand that the digital world sits within, and is supported by, a physical environment.  It totally depends on computers (be they smart phones or watches), server farms and a physical cable or satellite.  And all of these are powered by electricity, which is a natural force, and which is itself influenced by other natural forces.  So, what happens if something (or even someone) “pulls the plug” so to speak and brings the grid down?  Whilst the internet is built to withstand a nuclear explosion the electricity system is vulnerable to things like solar flares and other natural phenomena.

As Lewis Dartnell says in “The Knowledge”:

“People living in developed nations have become disconnected from the processes of the civilisation that supports them. Individually, we are astoundingly ignorant of even the basics of the production of food, shelter, clothes, medicine, materials or vital substances. Our survival skills have atrophied to the point that much of humanity would be incapable of sustaining itself if the life-support system of modern civilisation failed, if food no longer magically appeared on shop shelves, or clothes on hangers.”

Whilst we focus on the threat to humanity potentially posed by AI and other “Terminator-like” scenarios I see little focus on the vulnerability of our current systems, nor much of an awareness of how robust they really are.  We are so used to things around us working that we all too often forget how wondrous and amazing they really are – as Arthur C. Clarke once said

“Any technology is indistinguishable from magic”.

But, perhaps the most important aspect about “awareness” is to teach people to “Learn how to Learn”.

This is not just about learning to code, or learning to use apps or particular tools and technologies.  It is about learning about ourselves – who we are, how we make sense of the world around us, and how we express ourselves.  This is nothing radical or different or new, it is a continuous thread in the story of human philosophy and a challenge that we all have an interest in addressing.  But for the first time we have tools and resources to see the world globally, to understand the “collective unconscious” and to pry into the neurobiology that defines our humanity.  And that is very exciting.