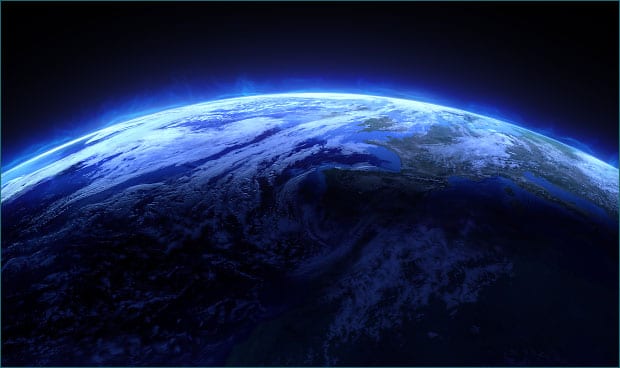 “Our planet is a lonely speck in the great enveloping cosmic dark. In our obscurity, in all this vastness, there is no hint that help will come from elsewhere to save us from ourselves.”
(Carl Sagan, “Pale Blue Dot”)

There is nothing like looking at an image of the Earth from space to give a little perspective.

We spend so much time preoccupied with our day to day lives that we rarely give much thought to something so vast as the Universe, but there are times when this sort of contemplation is both useful and inspiring. These are often when we find ourselves in “the interstice”, the space between one thing and the next – between years, between jobs, between phases of our lives. These are times when we suspend our day to day activities and let go for a minute. And, with “letting go” we can often get some added perspective to dream of possible futures, explore new ideas, and see older ones in a new light.

I have used the 2103-2014 interstice to read two books: Paul Johnson’s “Socrates: A Man for Our Times”, and Carl Sagan’s “Pale Blue Dot: A Vision for the Human Future in Space”, both of which I have found deeply thought provoking in different, but complementary, ways.

Socrates is credited with saying that

“A life without examination is not worth living.”

In his biography of the great philosopher Paul Johnson links the notion of “examination”” with Socrates’ concept of “philanthropy”, and, quite specifically, his “desire to promote the welfare of others” by wandering around talking to the people of Athens and “examining” them as he examines himself. His goal was to help “individual men and women to become better morally” in order to live “better” lives and serve their communities. I find this a wonderfully refreshing view on “philanthropy” which is much broader than just the giving of financial support, it is about inspiring and providing the opportunity for people to become more self-aware and more cognisant of the impact that they might have on other people and the world around them.

This notion of “examination” struck a chord, particularly as I thought about some of the “key defining moments of 2013” and read numerous articles on the predictions for 2014, which all seem to involve a growing focus on the “self” – from technologies to facilitate the quantified self to the latest fascination with the taking of “selfies”. As human activity is more and more facilitated and underpinned by digital interaction technologies, the relationship between what we consider to be “self” and what we consider to be “others” is changing.

Edward Snowden observed in his Channel 4 Alternative Christmas Message that

“A child born today will grow up with no conception of privacy at all. They’ll never know what it means to have a private moment to themselves, an unrecorded, unanalysed thought. … The conversation occurring today will determine the amount of trust we can place both in the technology that surrounds us and the government that regulates it. … Together we can find a better balance, end mass surveillance and remind the government that if it really wants to know how we feel, asking is always cheaper than spying.”

Snowden made this statement after having revealed the pervasiveness of government “spying” around the world, and with it, the value of data as a currency, on many different levels. Knowing what we do as we go about our daily lives has always been of interest to governments, but in the analogue world they were largely reliant on what people sought to tell them, and the concept of personal “privacy” was pretty much taken as a given. In the digital world we are slowly waking up to the fact that “privacy is no longer an afterthought”, it is looming as the major issue of the next decade, and it is time that people demanded that their governments ask, rather than be spied upon.

“I don’t think any social system, any government, can survive knowing everything about its citizens without ultimately that being corrupted.”  (Privacy Advocate Danny O’Brien, “In Google We Trust”)

As I thought about this I considered how Socrates would have considered these issues which face us in the digital world. From my understanding it was Socrates’ openness and humility that enabled him to engage with people in conversation through gaining their trust. He was driven by a need to serve and to helping others become more aware of themselves through the process of “examination”. I would also suggest that he was driven by an intense curiosity about the human condition, which has driven scientific quests for millennia.

“Modern science has been a voyage into the unknown, with a lesson in humility waiting at every stop.” (Carl Sagan, “Pale Blue Dot”)

Humility is at the heart of “examination”, because in order to objectively and dispassionately understand what is going on the “self” must be taken out of the equation as much as possible, and perhaps this is now one of the most important questions for the twenty first century: who are we, and what do we want to become?

“Technology challenges us to assert our human values which means that first of all we have to know what they are.” (Sherry Turkle, “Alone Together”.)

Socrates was “the first to call philosophy down from the sky and establish her in the towns, and bring her into homes, and force her to investigate the life of men and women, ethical conduct, good and evil.”  His legacy was that “he brought morals from the shifty atmosphere of quasi-divine bargains, frauds, and compromises into the blazing daylight of ordinary honorable transactions between men and women striving to be honest”.

Being honest and authentic is something that our newfound presence in the digital world is going to highlight as never before, and will bring forth dilemmas which we need to understand and address.  As we embrace this new year of 2014 we have the potential to begin to take this to the next level and develop a literacy for the digital age, building upon the wisdom of the ancients combined with the knowledge we have acquired through scientific enquiry and framed within the all too immediate legacy of the past century which saw the bloodiest era in human history.

It is all about consciously deciding just how we want to examine ourselves, and allow others to examine us, and acting accordingly.

Generations of Hope
The magic of trust