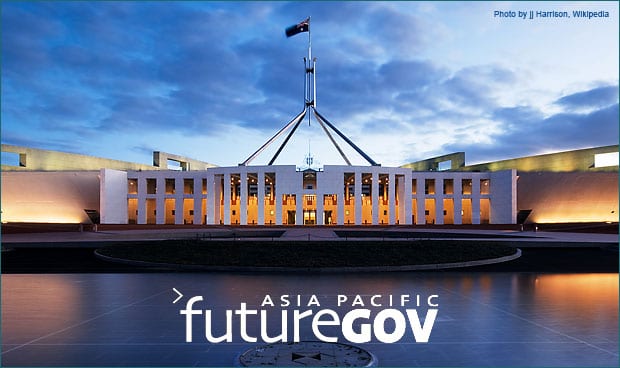 In her latest contribution to “The Drum” journalist Annabel Crabb confronts what she describes as the “rootless and shallow” nature of current Australian politics.

I’ve been covering politics since 1999 and I’ve never, until this year, ever sat in the press gallery, looked down and thought, “I actually don’t think I can bear another second of this.”

I felt quite relieved when I read this because, for my own part, having been closely connected to government and governance for most of my life, I have to say I feel exactly the same.

And this feeling was even more exacerbated by the conversations I had at “FutureGov” last week. The reason why? Because FutureGov is a three day congress which focuses on the technology and management challenges of current and future government, and its format of rotating interactive discussion tables, interspersed with keynote and panel sessions, was excellent in enabling just such a discussion. But in every case it was a discussion with a view to achieving outcomes.

What is clear is that governments the world over are struggling to redefine themselves, and to understand not only what is expected of them but how to service their communities in an increasingly complex and rapidly changing world. And when I say governments I mean, in most cases, the combination of elected officials and their supporting bureaucracies, the team that together comprises the public sector, and who are charged with keeping our societies running as best they can. To me one of the most revealing observations was that many countries are struggling with real crises in terms of dealing with either natural disasters (Japan and New Zealand) or financial constraints (the UK and the US), and that it is in times of these crises that governments are able to change and to be truly innovative in what they do. There seems to be a joint commitment by both the politicians and the bureaucrats to make things work, and they are achieving some impressive results.

The common theme running through all of the sessions and group discussions was that of the need to share data and information. In some contexts this related to data reuse in order to enable new business opportunities and the better provision of services, exemplified by numerous initiatives in the UK such as mysociety.org. In others it was about creating a better online experience for citizens who are demanding a much simpler way of interacting with government, believing, albeit naively, but perhaps rightly, that governments should be, and in fact are, more connected and co-ordinated. The whole “eGovernment” and “Web Services” conversation that was dominant in 2007 is now moving to a new, and perhaps more realistic, level and this was due to the combination of maturing technologies (including linked data and semantic technologies, the growing acceptance of both “the cloud”) and public demand (the expectation of mobility and the increasing prevalence of social interaction). Whilst neither of these is new the empowered constituent is now driving the need for greater government accountability and we are, perhaps, finally heading towards a true tipping point.

What was interesting was the persistence of the “Tell Us Once” idea that emanated from Sir David Varney’s Transformational Government Review “Service transformation:  A better service for citizens and businesses, a better deal for the taxpayer” in 2006. This concept is “to develop a cross-government identity management system which would, quite simply, make the interaction with government both easier and simpler. It should enable a greater personalisation of services whilst also reducing duplication across government” so a win-win for both government and the people. An example of this is that when it comes to Change of Life events, such as birth or death, instead of having to contact multiple government departments a citizen should just be able to do so once and the relevant information should then permeate throughout all the relevant agencies.

Whilst this may sound both logical and simple the reality is that governments, like many organisations, are siloed and probably constrained more by policy than technical impediments. There are a number of initiatives that are overcoming that however, for example South Australia’s “Ask Just Once” which seeks to organise information and services around customer needs, not government structures. And the recent changes to www.australia.gov designed to provide a more simplified approach to dealing with different government agencies.

All of this is founded on the basic assumption of “digital by default” where people have access to digital interaction technologies which enable them to obtain digital information, and the growing demand for transparency. Former UK Deputy GCIO and UK Transparency Board member Andrew Stott told the FutureGov audience that in this day and age

“Government needs to be open because it can no longer be trusted not to be”.

The underlying concept of trust is driving much of the “Open Government” agenda and, according to Stott, the publication of all UK government contracts over £500, together with public sector salaries and expenses, is having some marked impacts on the behaviour of both elected and government officials. It is also creating some new entrepreneurial business opportunities through leveraging government data to provide new services.

“IT is increasingly seen as being an enabler rather than an obstructor for business”.

“Tell Us Once” is now a key service within www.direct.gov.uk, the official UK government website for citizens, and on our table we were extremely fortunate to have as our co-facilitator Will Stengel, Acting CIO for DirectGov. During the course of the two days Will shared his insights and experience of how the UK government was coping with the challenges of both a financial crisis and the bringing together of technology and management to create a framework for the digital world. For Will the financial crisis itself had been a major catalyst in driving innovation, not in the technical aspects, but in harnessing the resources of Web 2.0, cloud based applications and platforms together with open source technologies to enable the design and delivery of better services. Quite simply this happened to a large degree because they proved to be the cheapest and most effective ways of doing things.

The core theme underpinning this is that the services themselves are delivered by government but are owned by the people, and the change required is that of mindset, not technology.

It is about not only servicing the constituents but servicing and empowering employees, and for organisations to let people use their tools of choice rather than forcing them to use standard systems to do their work. This means recognising and reflecting what they are comfortable with and use at home, of asking “why not” when confronted with new ways of doing things because people as people will most likely innovate around the road blocks and mandated processes themselves.

Essentially all of this is about:

It is about people and what Web 2.0 and social media were doing was forcing government out into the open, into being required to defend the decisions that have been made and to give access to the qualitative data behind that decision making. Government can now no longer be closed because

“People have now jumped over the walls and are inside government – government is now inside out.”

In the UK “Tell Us Once” has evolved to become www.direct.gov.uk and that itself is now the Government Digital Service which is developing a single gov.uk domain. The UK piloted this with alpha.gov.uk and is now making the “clear next step towards the gov.uk revolution”.

And, it is not only the UK that is making progress with this. In a recent interview with Asia Pacific FutureGov James Kang, Assistance CEO of Infocomm Development Authority of Singapore, states that

“the new world is about collaboration, which isn’t about technology – it’s about new culture and mindset. Government by nature is conservative – it wants to be robust. But today it’s more important to be agile and resilient. It requires moving fast, taking small steps:  do, learn, adapt.”

Other initiatives we heard about were those in Japan which is trying to deal with health records and data in order to better service an aging population; eConveyancing and the National Library in Singapore; New Zealand’s work in publishing open data, and Taiwan’s data portability initiatives through its ePortal services.

All nations are struggling with the challenges of complex legacy systems and the divergent demographics of digital immigrants and digital natives, each of whom will approach the digital world in different ways. However what is prevalent is what was described as the “always on” customer who expects government services and information to be as speedy and flexible as that which they are now getting from the private sector and from their communities.

In the era of “inside out” government people are watching closely every move that is made, there is a need for the rhetoric to meet the reality, for a much higher degree of authenticity and integrity in order to earn and receive public trust. And whilst much of the business of government is to keep the wheels turning it is also to work collaboratively with the people and reflect back to them what society demands. One of the most revealing comments was that of the Deputy Australian Statistician, Peter Harper, who described the experience of the ABS’s recent foray into social media with the eCensus. Harper’s advice was that if you ask people for their participation and involvement they will willingly give it, and you then need to be able to both listen and respond to that participation.

And that is the challenge for early twenty first century government – it needs to not only listen, it needs to act.

In a world of social media people don’t have much tolerance for debate over action.

So, let’s go back to the issue posed by Annabel Crabb and the question which Senator Kate Lundy asked in her keynote address:

“Does the government of the twenty first century shape or merely reflect the resilience of a civil society?”

Whilst there was much talk at FutureGov about Australia’s leadership through the Gov 2.0 Taskforce, the reality is that other countries are making as much, if not more, progress in some areas than we are and focusing their energies on outcomes rather than self-promoting rhetoric. It is true that Australia has done some wonderful work in the area of utilising Web 2.0 and social media in emergency situations (again, forced by a crisis) and there are some exciting initiatives happening at State and Territory level. But when it comes to other areas there is a lack of real political leadership to support the bureaucrats who are working tirelessly to make things happen.

The great weakness of the Australian political system is that it is incapable of reaching agreement, even where agreement essentially exists. It wears itself out on fights that aren’t really fights. We might think of our great old political parties as prize-fighters, but they never even get to the ring; they’re too busy punching each other to death over who gets the dressing room with the comfy couch. No wonder the crowd’s restive.

What we should be thankful for is that our wonderful people who operate the machinery of government are in many ways just getting on with the job and providing leadership from the ground up.  If only their political counterparts would stop the playground in-fighting, grow up and help them, then as a country we could get into the fray and help the rhetoric match the reality.

Remembering 9/11
Transparency and the digital society