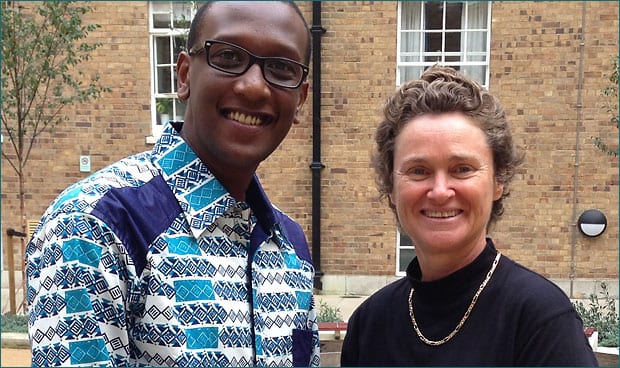 This week I went to Goodenough College in London to met Dr Lionel Nizigama, a young doctor from Burundi, who is just starting a Master of Science in Tropical Medicine and International Health at the London School of Hygiene and Tropical Medicine, University of London.

Lionel is the first recipient of “The Rowland Scholarship”, which we have established at Goodenough College in honour of my parents, and the first initiative of the Intersticia Foundation, which is in the final stages of being set up.

The Foundation has the objectives of providing assistance to individuals and projects in their early stages of development. These are often in the “interstice”, the space where people are exploring new ideas, spreading their wings, and reaching to out connect with others, but uncertain of next steps and very open to change.

In particular we will look to supporting:

We do this through working in partnership with other organisations, such as the Goodenough College, and our focus in on three key areas:

I have been giving a lot of thought to the notion of philanthropy in the last few years, and one of the defining, and most profound, quotes for me was that of Bill Gates who stated on Q&A earlier this year.

“The role of philanthropy is to do very tough things. The easy stuff can be solved by government and others.”

Having spent many years working in Government this made perfect sense, and opened up the realm of possibility for the “third sector” to make a very real difference, without being either patronising or paternalistic.

Doing the very tough things is what a great many people are seeking to do, and Lionel is no exception. He has lived and practiced medicine in his native Burundi and, after focusing on areas such as childhood blindness and HIV/AIDS, is now exploring new territory and totally open to where the world will take him.

Burundi is one of the five poorest countries in the world.  It has one of the lowest per capital GDPs of any nation in the world. The country has suffered from warfare, corruption, poor access to education and the effects of HIV/AIDS …  (and) is the least globalised of 140 surveyed countries.

Goodenough College is responsible for managing and awarding the scholarship, and, in his application letter to the College, Lionel stated that

“I decided to apply for Goodenough College because the outstanding extra-curricular activities best fitted my needs and expectations. I see my future involvement in different activities at Goodenough College as the perfect continuity of a long-standing commitment to bringing change. Countries like Burundi, recovering from conflict, are in serious need of well-trained people in various areas. I am confident that having accommodation at a centre of excellence such as Goodenough College will be a stimulating experience and rich exposure to peers, and will positively impact my studies at the London School of Hygiene and Tropical Medicine.”

Wow! Have we kicked off with a bang!

Government as a Social Machine – First Report
Web Science down under