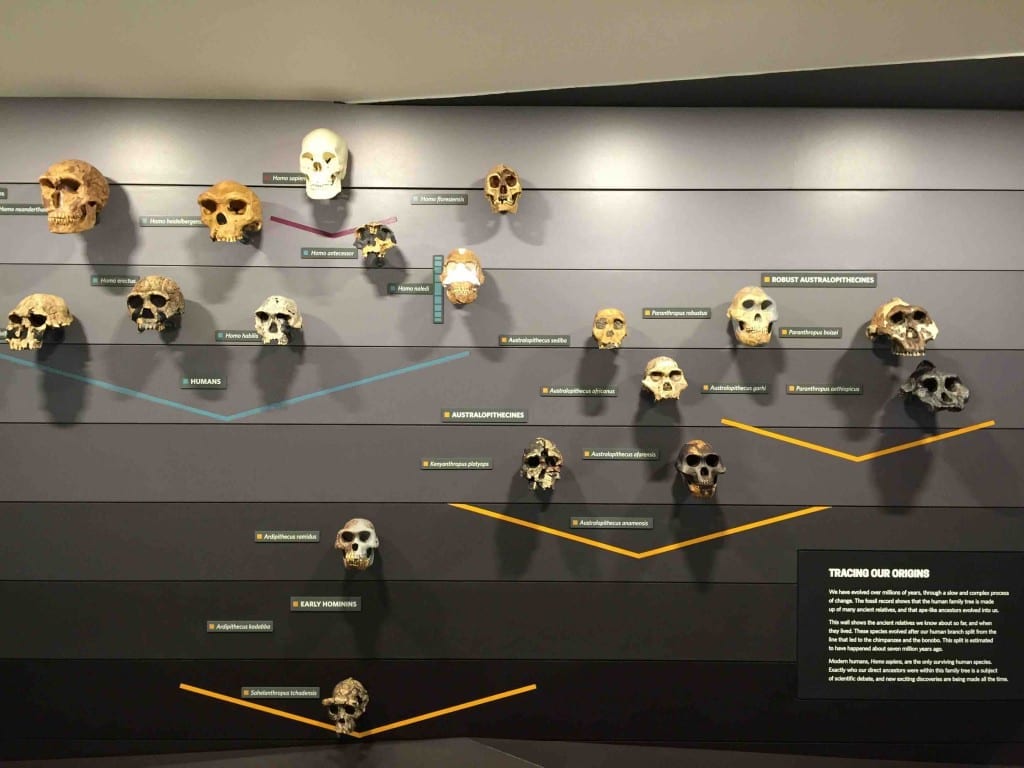 In the 17th Century Blaise Pascal came up with his famous “wager” about the existence of God.

After reviewing the pros and cons of believing in God, Pascal concluded that it is better to believe, just in case.

Believing in something greater than ourselves is an essential part of the human condition. As we have believed in God to explain the World around us and help us try to solve the World’s problems, so we have also believed in science to do likewise.  The relationship between science (and the technologies which it spawned) and religion is complex but throughout human history has been symbiotic – one cannot exist without the other.  At the core both have sought to help us understand ourselves and what it is to be human.

As I gazed upon this image of human evolution at the Natural History Museum last weekend I pondered this very question.

Many believe that we are now in the early stages of what is being called the Fourth Industrial Revolution, the next wave of human ingenuity and “progress”.  According to scientists it is human activity which is now the major cause of geological change (the Anthropocene Epoch) and the difference between now and previous eras is that in addition to changing the world around us, we are now beginning to fundamentally change ourselves (see The Robot Economy for some of the commentary around this).

The World Wide Web was invented to solve the problem of information sharing harnessing the power of digital means to create boundaryless information environments enhanced by both human and digital networks.  Many people had laboured over this problem, and the work of Ted Nelson is seminal in terms of framing some of the thoughts which others then acted upon. What resulted was the Social Machine, a socio-technical system which relies totally on the co-dependency of humans and digital interaction technologies, and, as the Web evolves so, are we.

The ability and opportunity to study this evolution in almost real time is what underpins Web Science, not as humanity on the Web, but Humanity as the Web. – as we create the Web so Web is creating us.

Google is the ultimate Social Machine and a perfect illustration of how our commercial and social activities feed upon each other.  Google, as a company, is owned and driven by human scientists who are striving to create a super intelligence.  Simultaneously this scientific work is underpinned and supported by a commercial structure (driven by advertising and search) which relies totally on human input, desires and interests. Whilst Google aims to give people the ultimate choice in terms of information and knowledge, its business model is based on gaining human attention by tailoring its offerings with a view to corralling its users into a bounded Google space.  The irony is that Google has been built upon the openness of the Web, but its activities may result in the Web’s demise.

Adam Smith believed that not only is Capitalism based on giving customers choice, but what is most important is to educate customers on how to exercise that choice responsibly. We have spent aeons exercising choice in our interactions with the physical world around us, but when it comes to the digital realm we are still novices. Despite the fact that people are beginning to realise that their data and choices have value (for example India’s banning of Facebook’s “Free Basics”, a “free” internet service for the poor) many people don’t realise how to exercise choice in terms of the platforms they use – operating systems, browsers or search engines.

Education has always been a way to achieve progress.  Throughout history there have been numerous examples of societies which have emerged from times of war and chaos to prosper through educating their people (this wonderful interview by Philip Adams with former Vice President of Vietnam Madame Nguyen Thi Binh  demonstrates this point).

Whilst most of us in Western democracies have not recently emerged from a time of war, we are nonetheless in a time of disruptive change as the digital realm challenges, as well as enhances, the physical one.

Ultimately, we each have to choose how we interact with technology and what our own comfort levels with it are. The greater awareness and honesty we have about its strengths and weaknesses, the better we can make healthy decisions about how to use it in our own lives—individually and collectively. As new technologies appear, this integration doesn’t happen overnight; it takes years of everyday use by everyday people. (Alison Berman)

Information in digital form is presenting new challenges and choices in every aspect of our lives.  We are needing to rethink the concepts of education, work (see Amplifying human potential: education and skills for the fourth industrial revolution), medicine (the use of robots in hospitals), and the logistics of getting around (many believe that autonomous vehicles are inevitable).

Social Machines are changing both our surroundings and every aspect of how we relate to each other, to organisations, to communities, and even to ourselves.

The main choice we need to make now is “what sort of humans do we want to be?”

The one common theme that is emerging from all of the “digital savvy” workshops that we have been conducting is that these questions are becoming part of the zeitgeist of modern life.  Just last week I attended the Goodenough College Chairman’s Dinner in the Arts and Humanities and the speech by John Fingleton was underpinned by all things digital – from robots to competition to privacy.

Marvin Minsky, one of the leading lights of Artificial Intelligence, believed that an intelligent AI might be able to solve some of our greatest problems, but that these problems were largely of our own making – they are anthropological in nature.

As we continue down our path to create different kinds of intelligence we are also travelling the path of creating different kinds of human. Our technologies are relieving us of many burdens, but in the process we are also losing many of the core skills that have helped us survive and prosper as a species – reading maps, memory recall, even changing lightbulbs! It may be that my children are the last generation to learn to drive, which is not, in itself a bad thing, but what sort of dependencies does this create and what benefits do we gain as a result? If something goes horribly wrong what skills do we need to keep just in case we need to reboot civilisation?

My spider sense is telling me that we may be asking the wrong questions.

Most of the commentary I read about AI is about how to write the code to ensure that intelligent machines continue to serve our needs and don’t harm us.  However, wiser souls, such as Stephen Hawking (listen to his 2016 Reith Lecture) are suggesting that it may be that once the power of these technologies is unleashed we should be asking ourselves not how to control them, but how to co-exist with them.  In Sci-Fi scenarios we are often rescued by nature (think War of the Worlds).

In the game of life and evolution there are three players at the table: human beings, nature, and machines. I am firmly on the side of nature. But nature, I suspect, is on the side of the machines. (Darwin Among the Machines, George Dyson)

Perhaps what we should be focusing on is to develop the value of our innate humanity as a force for good in making a positive contribution towards life on Planet Earth, rather than continuing with our arrogant mindset of harvesting and pillaging our environment to feed our greed and desires for “more”.  Steven Pinker’s The Better Angels of our Nature gives a sobering overview of how human attitudes towards violence and destruction have changed over the millennia, and how, as we gradually gain a confidence in our abilities, we have, in fact, become more peaceful, at least towards each other.

In his famous 1784 essay What Is Enlightenment? Kant gave some wise advice:

Pinker’s research demonstrates that we are slowly growing up, and instead of a “shoot first, ask questions later” survival mentality, we are gradually gaining the confidence to trust in our intelligence and to explore less aggressive solutions.  But this confidence needs to be accompanied by a healthy dose of humility in realising that we are but one species and we have a responsibility to make wise choices on a much more macro scale along the way.

For our very survival it is crucial that when our machines surpass us in both physical abilities and intelligent smarts we are able to interact with them as sensible mature adults, not frightened and arrogant adolescents.

Ultimately we are all making a bet on our future. We need to realise that there is no option of “waiting it out” or sitting on the sidelines.  Each and every one of us is facing a future very different from anything we have previously known or been conditioned for.

As Pascal wisely calculated, it is better to believe that this is the case, and prepare for it, just in case.