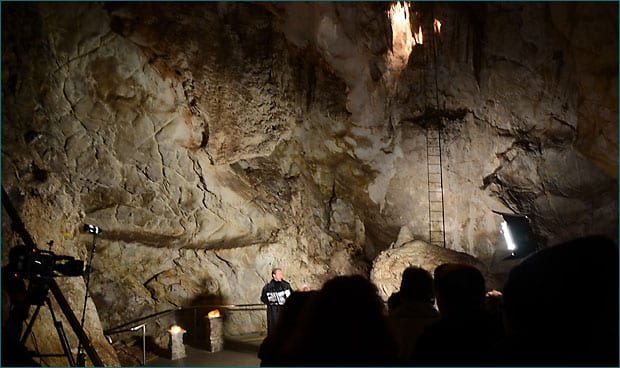 Yesterday I had the very great privilege of partaking in the first ever “Poetry in the Cathedral Cave” presented as part of the Sydney Writers’ Festival 2012.  Readings in caves are probably as old as humanity itself, but this was a first for the Festival, and it certainly was quite something.

It began with a fairly challenging trek (at least for some) up the 240 odd stairs to the cave itself, to be greeted by fluted music and the most incredible “natural” architecture.  Once inside the official proceedings began with readings by noted poets David Brooks, David Malouf, Brenda Saunders, Judith Beveridge and Mark Tredinnick, who all recited their work in the Cathedral Cave at Jenolan Caves, Oberon, presented by Varuna, the Writer’s House.

Two things struck me as I sat trying not to wriggle in my seat as people struggled to hear (unfortunately the acoustics were a little challenging).

Firstly, that all those years ago when I was  on the personal staff of Hon. Peter Collins as NSW Arts Minister, little did I think that our work towards supporting the NSW Writer’s Community with both Varuna and the NSW Writers’ Centre in Rozelle, would lead to such a wonderful Festival and celebration of the craft of writing.  It’s funny how things come around.

Secondly, I thought about the allegory of Plato’s Cave (from “The Republic”).  For those who may not know this story here is a simple overview.

Imagine there is a group of people who have been imprisoned in a cave chained to a wall since birth, unable to move except to look at a blank wall in front of them upon which are shadows.  Behind the prisoners is an enormous fire, and between the fire and the prisoners is a raised walkway upon which people walk carrying things on their heads “including figures of men and animals made of wood, stone and other materials”.  The prisoners cannot see the people, they can only hear their sounds and see their shadows, and, knowing nothing else, they believe that these shadows are, in fact, the people themselves.

One of the prisoners is then freed, and allowed to stand up, to see the fire and the people, and eventually allowed to go outside of the cave to see the sun.  After the initial shock his eyes would gradually adjust and he would realise that there is a world of “reality” beyond the darkness of the cave.  He is then allowed to return and wants to explain his adventures to his fellow prisoners, but unfortunately, they cannot imagine the sun, nor can they relate to anything that he tells them, and they may perceive him to have gone insane.  For his part, having been outside his eyes are no longer adjusted to the shadows and he no longer sees them as he did before.  They now live in two worlds.

As I listened to these wonderful poets recite their verse and sat inside the glorious cave around me I thought about how easy it could be to be divorced from reality, and, that perhaps much of the attraction of the online world is a little like being in Plato’s cave.  So much of what we witness within the digital environment is like a reflection of life, either described through social media or gathered though data visualisation, but it is not life itself.  Life itself remains in the physical world, and in the world of sunlight.

Whilst the Allegory of the Cave has many layers of meaning it is also a marvellously simple metaphor for how philosophers – amongst them writers and poets – struggle to reflect back to us some of the stark realities of life, and are often dismissed or ignored.  Having come from a family of poets and writers myself the world of words is something I find both alluring and yet also daunting, and a challenge that continually beckons.

One thing the digital world seems to be doing is to bring back the craft of writing, no matter in what form, and that craft is taking new twists and turns, melding with other forms of expression to enable the written word to be truly liberated.  But the other thing it does is allow people to hide behind those words, and to at times express themselves in ways that are neither appropriate nor respectful.  They can be cowards.

This is something that a poet, or writer, or stage actor or presenter simply cannot do.  As they stand before a group of people who have travelled for miles (and perhaps trekked up into a cave) to hear them, they are exposed and vulnerable.  They bear themselves and their craft and are at the mercy of that audience who perceive that this is reality.  For me this is true bravery, and something I think we need more of in our society.

Viva Europa!
Living in my world? I don’t think so ANZ