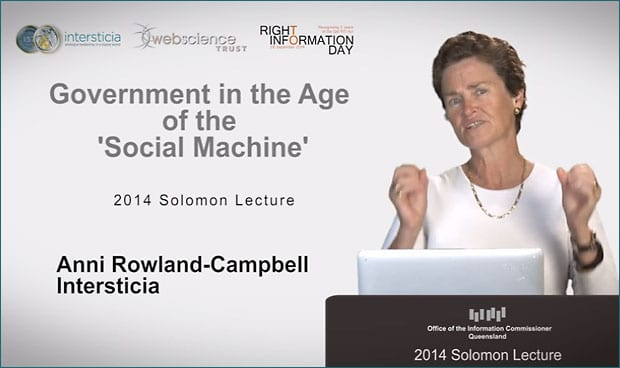 Almost immediately upon my return to Australia I travelled to Brisbane to record and deliver the 2014 Solomon Lecture, “Government in the Age of the ‘Social Machine’”.

The process of developing and delivering this lecture has been a fabulous exercise in terms of thinking about, and exploring, my own ideas around the “Right to Information”, and the timing was perfect in that I was able to draw upon the many and various conversations and experiences that I had over the past few months, both in Australia and overseas.

As the concept of the “Social Machine” continues to evolve, so do our thoughts and perspectives around information, in all its forms, together with the accompanying realities of how to approach and deal with other “rights”, such as privacy and risk.

Personally, I believe that Governments everywhere have a significant leadership role to play in representing the human societies which they serve by forcing us to ask the questions which need to be considered as we shape the information world of the twentieth century. And these questions need to be asked on “human terms”, not those which are reactive to the challenges thrown at us by machine technologies.

I have no problem with slowing things down, with some of the clumsy outcomes that legislation may lead to, as long as we take the time to consciously choose what sort of future we want, rather than being led blindly and naively by “technological determinism”.

Fundamental to this “leadership” is the requirement that they (as in Governments) must educate themselves as well as the people and communities which they serve.

For those who are interested I have posted the lecture and accompanying notes here, and ANZSOG have written a blog post which can be found here.

Meaning and money (or is that money and meaning?) at SOCAP14
The “anthro-pocene” era … redefining “humanity”