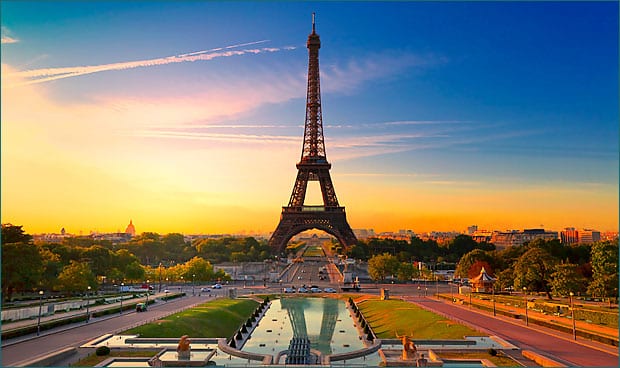 In the last couple of weeks I have been immersed in the world of “Web Science”, initially with a workshop on the “SOCIAM” project at the University of Southampton, and, following that, with the Web Science 2013 Conference in Paris.

Both events have given me an opportunity to more fully understand a little more about “Web Science” as a discipline, together with some of the challenges facing Web Science researchers. My own personal challenge is to more fully understand how this links in with the work we want to do with Web Science Australia, and how to connect this to a broader educational agenda leveraging the research findings to solving real world problems, particularly for government practitioners through ANZSOG.

In the opening presentations at the SOCIAM meeting Nigel Shadbolt stated quite clearly that one of the main questions being asked within the project is “what exactly is a “social machine”? Originally Tim Berners-Lee described it as a socio-technical system within which the humans provide the creativity and the machines do the administrative work. But, what exactly does this mean?

In my last post I described a number of “social machines” which we can now recognise as the physical and digital worlds become ever more inter-connected with data senses and “smart” technologies – in clothing, houses and our everyday utilities.

It is hoped that through the support of “serendipitous data integration by end users”  researchers will be able to create and investigate web-based tools (social machines) with which to research and more fully understand human behaviours on the Web.

There were two projects presented which I found the most impressive:

Both of these demonstrate the power of utilising and exploring the Social Web in the pursuit of science, and the model below (developed by David de Roure) gives an insightful overview of where the concept of the “social machine” fits in to the overall technological landscape. 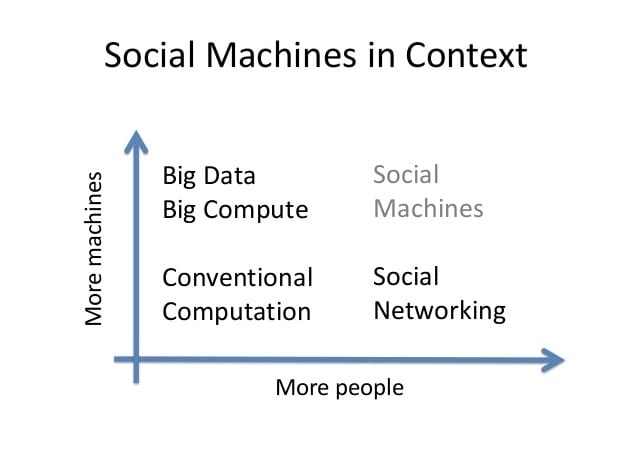 The Web Science 2013 conference in Paris was an opportunity to participate in a broader conversation with people involved in Web Science from around the world. Whilst it had an impressive line up of speakers, including Vint Cerf and Cory Doctorow, I found the most interesting and worthwhile session was the workshop entitled “Harnessing the power of social theory for the Web”.

The opening presentation was given by Dominique Boullier who described the evolution of perspectives around social and technical theory over the ages, and his main point was that the mindsets we are adopting now are a result of that evolution. This is where I really began to see the potential for Web Science as a truly integrative framework within which to break down some of the Cartesian barriers that have existed between the arts and sciences, and as the discussion progressed an intriguing comment was made that

“we, as the human elements of the Web as a social machine, ‘inhabit the data’ ”.

What does this mean?

“the Web is something you ‘do’, it is not something that ‘is’ … it is a verb not an action” (Stephane Bazan).

The Web is a combination of humans creating and communicating, and the underlying technologies enabling that. As Wendy Hall reminded us

“the basic tenet of Web Science is that Tim Berners-Lee did not invent the Web, he invented the protocols to enable ‘us’ to create the Web.”

If we acknowledge that “The Web is Us”, then we need to understand a lot more about its societal impact. This was the topic of the final session I attended, “How the Web will revolutionise Society” which was a panel comprising:

This session approached some of the bigger picture issues, but the main points of interest were the need for greater education of technologists about socio-politics, and of politicians about technology. Amelia Andersdotter stressed that “governments define interaction spaces in society” but they do so from a position of relative naivety and ignorance. In addition, technologists build systems with too little cognisance of the political implications. This absolutely resonated with me, as did Jérémie Zimmermann’s summation that

“humanity is its infancy when it comes to learning how to interact on the Web, with both the technologies and each other.”

The Web has been an enormous success (judged by the explosion in how people are using it) because it helps people to solve everyday problems as the go about their daily lives. It is becoming integrated with and embedded within our social systems, and only a minority people have any idea of how it actually works, nor do to they care.

The value of Web Science as a discipline is that, through it’s formal research approach

But, there is more that it can do, and this is demonstrated by the SOCIAM project.

Because of the very real need to address urgent problems now (rather than in years to come, well after any academic papers have been published) Web Science has the potential, through education and practical problem-solving, to connect research and practice in the short term.

What is needed is a curriculum around Web Science (and this was discussed to an extent at the Web Science and Education workshop) which begins in school, goes through university, but is also linked to daily practice in the workplace.

As our lives are underpinned by disciplines such as mathematics and language, so, I believe, that everyone needs to understand Web Science, as they participate in and co-create the digital landscape we all inhabit.